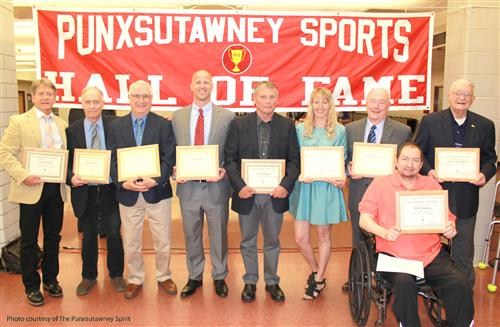 In high school Heather participated in 4 years of varsity cross country, indoor track and outdoor track and consistently led the teams with outstanding performances across the board. In cross country she qualified for and competed in the PIAA State Championships all four years and earned letters all four years. Her senior year she was the team captain and earned District IX Women’s Cross Country District Champion title as well as the MVP title for her team. She excelled in multiple events in track including 100m hurdles, 300m hurdles, 400m relay, 1600m relay, 200m dash and 400m dash over her four years on the team. She is the record holder in the 100m hurdles 15.9 and 300m hurdles 45.3. She also qualified for and competed in the PIAA State Championship meet all four years and earned 6th place in the in the 300m hurdles her senior year. Heather also served as the Indoor and Outdoor Track Team Captain and earned the High Point Leader Award with a total of 327. She was also awarded the MVP title during her senior year. She is a 1999 graduate and was co-salutatorian and was named Outstanding Female English Student. She was also senior class treasurer, student government senator, yearbook member, school newspaper editor, National Honor Society, Math Team, Science Club, Ski Club and Varsity Club. Heather was noticed by the Women’s Track Team coach from the United States Naval Academy and recruited to run for their Division I Collegiate team where she participated in Indoor and Outdoor Track at the varsity level for three years and earned four letters at USNA. She is a Major in the United States Air Force Reserves, where she continues 11+ years of service as a Special Agent for the Office of Special Investigations. Heather as lived in Italy, Qatar, Spain and Argentina and has traveled extensively throughout North and South America, Europe, the Middle East and the Far East. Her interests include snowboarding, SCUBA diving, cooking, skydiving and traveling. She is the owner and primary photographer at Zoe Cooper Photography is San Diego, CA. She is married to Jonathan Brenner who is a Management Consultant for Boston Consulting Group as well as a Lieutenant Commander in the United States Navy Reserve. They live in San Diego, CA with their two Yorkshire Terriers, Cooper and Zoe.

A 1965 graduate, John earned two letters in football and three letters in track and field. As a running back, he was named to All District First Team and All Skyline Conference First Team. Other football accomplishments include: scoring – 13 touchdowns, 9 rushing, 1 receiving, 1 kickoff return and 2 punt returns, 11 extra points for a total of 89 points which was 2nd in District Nine Scoring. Rushing – 138 carries and gained 725 yards for a 5.25 yards per carry. Punt Returns – 14 punts returns for 310 yards for an average of 22.14 yards per return. Kickoff returns – 8 kickoff runbacks for 240 yards for an average of 30 yards per return. Pass receptions – 3rd on the team with 7 receptions for 109 yards for an average of 15.5 yards per reception. John’s offensive contribution to the 1964 season was 1,384 yards and 43% of the team’s scoring. He remembers the 1964 opening kickoff 89 yards to score the very first touchdown on the new field. He was a two time PIAA Qualifier in the Javelin and set a District Nine record in 1965 in the Javelin with a toss of 182’2”. The 1965 track team was undefeated and he was a member of the first District Nine Team Title. He received his BS from Clarion University in Math Education and was a math teacher at Harmony High School for 42 years. He was the head coach of girls’ softball for 20 years and 7th & 8th grade girls’ basketball coach for 7 years. He is married to his wife Sharon.

He was a three year participant in track, two year letter winner in volleyball, three year letter winner in football. He was President of the Sophomore Class, Drama Club and Varsity Club. He graduated in 1966 as Honorary Captain of the football team his senior year. He was the only sophomore who started on the 1963 undefeated team, which was coached by Jack Hart. He was 1st string All District 9 and the only lineman to make MVP for District 9 Associated Press and United Press All State. He was Prep All American and an alternate for the Big 33 Game between Pennsylvania and Texas. Art and Dan Rooney asked and promised him a tryout for the Steelers upon completion of college. He was the only player at Cheshire Academy to start on offense and defense and was named Defensive player of the Year. He was the first recipient of the Thomas T. Barr Scholarship at Rutgers University in New Jersey, which was the home of the first ever college football game. Unfortunately his football career ended in his sophomore year due to a chronic muscle condition – McArdle Syndrome. He majored in American Studies and received his Masters of Fine Arts from Columbia University. He helped build and run Corners of the Mouth Restaurant organic food store and bakery in Cambridge, MA. He edited the book “Beatitude 33 Silver Anniversary” (a book celebrating the 33rd edition and the 25th year of Beatitude Magazine started by the beat poets Allen Ginsburg and Bob Kaufman.)

He was the quarterback for the 1964 football team with a 9-1 record and threw nine touchdown passes which accounted for 54 points. The team finished third in the 28 team Western Conference and won the Skyline Conference and Big 3 Title. In passing, he had 34 completions in 82 attempts averaged 8.2 attempts per game with 20 attempts coming in one game and 576 yards passing for the season with a 17 yard average per completion.   He lettered twice in football and three times in track and field. He set the high school record in javelin and triple jump and was a member of the first District Nine Team Title and undefeated track team in 1965. He received a football scholarship to Salem College in Salem, WV as a quarterback and played two years before leaving the football team due to multiple concussions.   He also held the WV Division II Collegiate javelin record and took first place at the West Virginia Intercollegiate Athletic Conference Championship track meet. He received a BS degree in Health and Physical Education and taught Phys Ed at Purchase Line for three years and 32 years at Jeff Tech until his retirement in 2004. He has coached track and field, football, recreation, Little League and Teener League baseball teams. He is married to Jan McMillen and they have two children Tonya and Dane and are members of the Presbyterian Church in Punxsutawney.

Bret is a 1992 graduate of PAHS and was a three-year letter winner in football.  He was named on the District Nine All-Star Team twice, was named Defensive Player of the Year, led the 1991 team as fullback to the state football playoffs, and played in the All-Star Football Classic in Altoona. He was also a three year letter winner in basketball, helped lead the 1991-92 team to the PA Western Conference Championship, and played in the All-Star basketball game at Pitt-Bradford.   He went to Indiana University of Pennsylvania to continue his football career, and then played semi-pro football for a team in Arizona. He is married to Lindsay Rumbaugh and is a Project Manager for the Meritage Group located in Pittsburgh.

He is a 1944 graduate and was quarterback of the football team. He also played basketball and was a member of Varsity Club. He lettered in football and basketball in 1942 and 1943. He received a football scholarship to Michigan State College (now Michigan State University) and played quarterback his freshman year. He also played on the Michigan State baseball team. He received a degree in Business Administration and coached youth baseball and little league football teams. He retired in 1990 from General Motors. He also served in the Navy.

He is a posthumous inductee from the class of 1966. He lettered in basketball, volleyball, golf and tennis. He was All District, high scorer and third team All State in basketball. He received a basketball scholarship to Wilkes College; however, he transferred after his freshman year to Penn State. He pursued a degree in Hotel and Food Service and accepted an auditor position with the Holiday Inn in Washington DC and later transferred to the Holiday Inn in DuBois. Joel was fatally injured in an automobile accident. His sister is Lou Ellen Cipolla.

Is a posthumous inductee from the class of 1954. He lettered in football, basketball, track and field. He played volleyball and baseball. He was voted Honorable Mention All District in football. Due to an injury he received in the DuBois game, he could not pass the physical to receive a scholarship. He attended Columbia Technical Institute he owned his own business for air conditioning, electrical, heating, and plumbing.