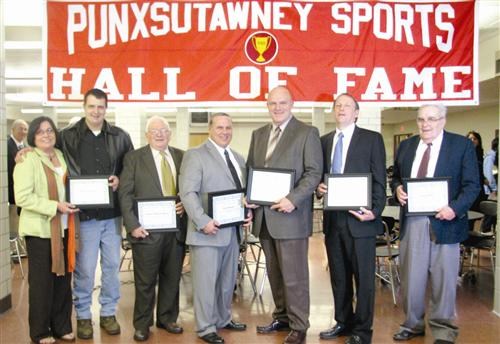 Gary is a 1976 graduate of PAHS and married to Dr. Terri Astorino (EUP Professor of Nursing.) He is the father of 3 children: Drew, Lauren & Matt. He is currently a senior guidance counselor at General McLane High School in Edinboro. During his high school career he was a 3 year letterman/starter and captain in wrestling, football & senior legion baseball. He was a 4 year starter in wrestling for Edinboro and was captain during his junior & senior years. He was on the top 10 win list at EUP, was a 4 year National Qualifier & PSAC place winner. He received the John “Butch” McBride Athletic Scholarship award to the EUP athlete exhibiting outstanding achievement in a varsity sport & high academic performance. He has been a wrestling coach at EUP for 23 years.

Mickey is a PAHS graduate with the class of 1950. He is a graduate of Clarion State Teachers College, was in the US Army (spent 18 months in Germany as the Colonel’s driver of a staff car) & graduated from IUP with a Masters of Education in 1963. During high school he was a 2 time letter winner in football & track & participated in baseball. He competed in the State Track meet in 1950, where he ran the 100 & 200 dashes & the 880 relay. He was a letter winner in college football in 1953. He was the assistant football coach at Punxsutawney from 1957-1970. He was JV coach, with only 1 loss; & was Jr. High Coach with an undefeated team 4 years in a row. He was also the head football coach from 1970-1972. He is married to Mary Lou Koromous & they have 3 children Michael, Mary & Stephen.

Bill played high school basketball at Cameron County HS & college basketball at Lock Haven University from 1973-1977, where he was a 2nd team PSAC All Star during his senior year. During his career at PAHS, Bill was the JV basketball coach from 1977-82 and was the head boys’ basketball coach from 1982-2006. During his 24 seasons as head coach, he had 324 career wins. In 1991-92 his team finished 27-3 – lost in the State Championship game to Steelton Highspire. He was named 1992 Associated Press Big School Coach of the Year in PA. He is currently the assistant Athletic Director and a member of the District IX Committee.

George was a varsity football letter winner & graduate of 1947. He played semi-pro football in 1949 in Jamestown, NY for the Niagra Falls League and Punxsy Beaver Bombers 1951 semi pro. He was a PIAA football official for 41 years. He was a semi pro official Whitetail Buck for State College in the mid-Atlantic League. And he was a baseball umpire for 49 years for the J.C. County League, Jefferson Indiana, Federal League Legion V.F.W. League. He is also former commissioner of V.F.W. baseball league.

Bruce is our posthumous inductee from the graduating class of 1969. He was an All State football player, playing linebacker & fullback. He lettered his sophomore, junior & senior years. He also lettered in track, throwing the discus and shot put. He also played basketball & other sports. He was a Zeedick Cup award winner and obtained a scholarship to Virginia Military Institute. He earned a degree in Civil Engineering.