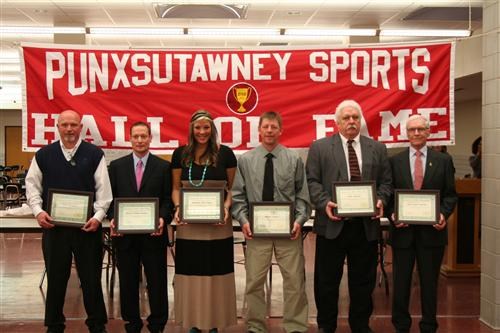 Ed is a 1978 graduate and was the first football player in the history of PAHS to set a record of 1000 yards rushing. He received All State Honorable Mention, first team offense CENPAC & Gazetteland, Big 33 Champs & nominee and the team had a record of 10-0 that year. He lettered 3 times in football & track and lettered 1 time in wrestling. In track he was a member of the record holding 440 and 880 relay teams. In 2010 & 2011 he competed in the Ohio bench press championships where he placed 2nd for his weight group and 3rd in raw masters. He received his Masters Degree in Taxation from the University of Akron and is currently a CPA partner/director in SS & G firm.

Kim was an outstanding athlete & letter winner in basketball, track & field & volleyball. In basketball her accomplishments included: 3 time District 9 All Star, Captain her Jr. & Sr. years, Named to the All Gazette team, & All District IX team, selected to play in the All Star games of Alice Kozel Foundation & Indiana County Regional, & as of 2000 she was the 1st player to earn All State Honors & named to the Associated Press Big School All State 5th team, held the record for most career rebounds of 928, record for most points scored in a single game as a senior with 40 points, most points scored in a single season with 451, most rebounds in a single game with 30, most rebounds in a single season with 348, & held the best shooting percentage record, leading rebounder & all time leading scorer in PAHS history. She was also MVP. In Track & Field she participated in Jr. Olympics National Championships for high jump in Houston, TX, was a state medalist in the high jump in her freshmen year at the PIAA Championships, was a winner of the James Manners Award at District IX in her Jr. & Sr. years, placed 1st in high jump, long jump (broke district record with a leap of 17’ 2 ¼”) & triple jump, and placed 3rd in hurdles at District IX championships her Jr. year, she was a silver medalist in the high jump in her Jr. year at PIAA State Track & Field Championships, Team Captain in her Sr. year, named to the All-Gazette Team, placed 1st at the Kane Invitation her Sr. year in high jump with a meet record, placed 1st in high jump at the TSTCA Championships, was PIAA District IX Champion in high jump, long jump & triple jump her Sr. year and was a state medalist in the high jump at the PIAA championships. In volleyball she was District IX All Star top vote getter, lead team in blocks & kills, Team Captain her Jr. & Sr. years. She graduated from PAHS in 2000 and graduated from St. Francis University in Elementary/Special Education. During her time at college, she participated in track & field and volleyball. She excelled in high jump and placed in several championships. She was also a record setter in volleyball with most blocks a single season – 87, most career blocks – 185, most career kills – 488, 3rd record for best hitting percentage - .297 & was selected to the Women’s Volleyball Northeast Conference 2nd Team. She is currently a teacher at Burgess Elementary in South Carolina.

Robert is a posthumous inductee who graduated in 1956 and was the recipient of the Class Hearts and was the Groundhog King in 1956. He was a 3 time letter winner in basketball & track and a 2 time letter winner in football. In track he was the District Long Jump & High Jump Champion. He played quarterback, running back, punter & kicker in football. In basketball he was 3rd team Honorable Mention in 1954, 2nd team All District in 1955, & 1st team All District in 1956. He was also an American Legion baseball standout. He was the only person in Punxsutawney High School to be awarded 3 letters for the 3 sports he played in 1956. He coached elementary basketball, Little League & American Legion baseball.

He is a 1953 graduate and lettered 2 years in football & track & field. He was an All-District guard and played in the All-Star game in DuBois. He was a school record holder in the discus (138’ 7”) for many years and placed 1st at Districts in discus. He played & lettered 4 years of college football & track & field at Southwestern College in Kansas. He received All Conference honors and made All-Methodist team in 1956. He threw discus in college against 4-time Olympian gold medalist Al Oerter. He coached Punxsutawney football 4 years including an undefeated junior high team that went undefeated their senior year. He was a school administrator in Brookville for 20 years.

Cliff earned 8 letters while attending PAHS including 3 football, 3 wrestling and 2 baseball. He was co-captain of the ’77 undefeated football team, Associated Press All-State Honorable Mention for 2 years, All Gazetteland 1st team linebacker, 1st team Central PA Athletic Conference linebacker, Big 33 nominee, named MVP in his junior & senior years as well as being honorary captain in his senior year. He led in punting with 41 yard average. He was wrestling co-captain his senior year & was on the undefeated wrestling squad in ’77. His wrestling record was 16-4-1. In baseball he had 8 doubles, 26 RBI’s, 23 runs scored & 13 stolen bases. His career batting average was .328, which lead the 1978 team to a 16-3 record. After a semester of football at IUP, Cliff chose to enroll at Hutchinson Kansas Junior College to play baseball. This led to a scholarship to play baseball at Emporia State University. He is still among the leaders in several offensive categories for the Hornets, including 7th all time with 24 career homeruns, 7th all time with 15 homeruns in a season & 9th all time with 141 RBI’s. He’s been employed by Ford Motors for 30 years.