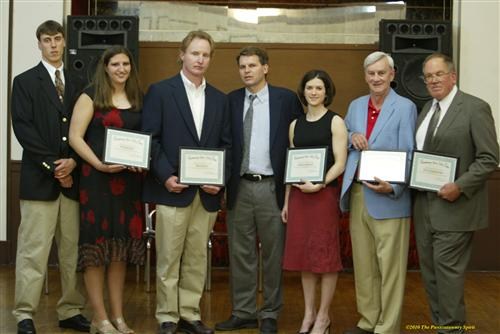 She is a 1995 graduate of PAHS and was a four-year letter winner in track and field. She set the school record in the 800 meter run with a time of 2:15.28. She won the District XI Class AAA title in the 800 in both her junior and senior years. In the state meet, she placed 9th in her junior year and 5th in the state during her senior year. She was also a member of the record setting relay teams in both the 400 meters and the 1600 meters. She attended Allegheny College in Meadville for 1 year, where she earned All American status in both indoor and outdoor track. She set the school record in the 800 meters, as well as being a member of the record setting medley relay team. She was also North Coast Athletic Conference MVP at the indoor and outdoor championships in 1996 and received All-American status. She transferred to Wake Forest University on a full scholarship and set marks in the 800 meters and 3200 meter run. She was also the top female weight lifter of the year at Wake Forest.

He is a 1969 graduate of PAHS and lettered in both track and field and football for two seasons. During his senior year, Bill was co-captain of the track and field squad. He was vice-president of the varsity club during his junior year and president of the club during his senior year. He was Rotary Club boy of the month and was named Rotary boy of the year in 1969. He also was a Zeedick Cup winner. He was a member of the Punxsutawney Jaycees and of the local BPOE Elks Club.

He is a 1982 graduate of PAHS and earned eight varsity letters during high school. He earned two in football, three in both baseball and basketball. He won the National Punt, Pass and Kick championship at the age of 12. Sam was a solid catcher and hitter for the baseball team. He was co-captain of the basketball team and set several school records – 48 points in one game, 781 in one season and 1,438 in a career. He was selected as Associated Press All State Honorable Mention and a nomination to the McDonald’s All American team. He attended IUP and is employed by Jefferson Wholesale Grocery.

He is a 1977 graduated of PAHS and earned letters in cross-country and track and field. He led the Chucks to four District XI cross country championships and was co-captain of the 1977 undefeated cross country team – the only state championship in the school’s history. While on the track, he held the school record in the 800 meters. He continued running at Slippery Rock University, where he was a member of the NCAA Division III National Championship Team. He ran on the record setting indoor 3200-meter relay team and set the record in the 800 meter run during the outdoor season. He also captained the 1982-83 team.

He was president of his graduating class of 1952. He earned three letters in basketball and All District Honors during his junior and senior years. The 1951-52 team was the first and only PAHS team to go undefeated during the regular season 17-0, before eventually bowing to Westinghouse 47-45 in overtime in the state semi-finals. While at Wilkes College, he lettered for three years in basketball and soccer and was co-captain for both squads. He was named to the Wilkes College 1950’s “Dream Team”. In soccer, he led the 1955-56 team in scoring, scored a hat trick and was nominated for All American Honors. He was Athlete of the Year in 1956 and was named to Who’s Who in American Colleges and Universities. He returned to PAHS to teach and coach junior high basketball under Chuck Daly.

He is a 1962 graduate of PAHS. He lettered three seasons in football as a lineman. He was an All Skyline Conference selection as a junior and senior, as well as, All District both years. He also was a High School All American. He earned three varsity letters in football at Syracuse University. After earning his Bachelor of Science and Masters Degree in Engineering from Syracuse. He acquired his PHD in Environmental Engineering from Northwestern University in 1972. He has traveled to facilities in the former Soviet Union, Germany, Korea and Australia. He is the author of more than 150 publications.