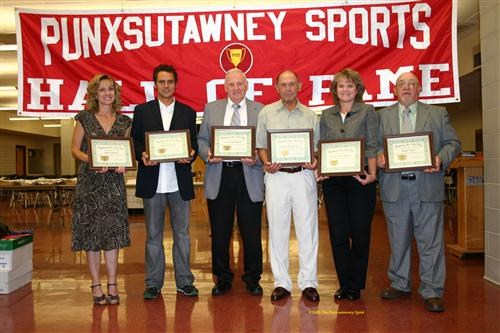 She is a 1977 graduate of PAHS and lettered in basketball two-years and was MVP her senior year. She was awarded high school All-American and Keystone West Sportswriters Association MVP. She also lettered in volleyball four years and was MVP her senior year and was named to the PIAA All-Star 2nd team. Following graduation, she was a member of the IUP women’s volleyball team. She graduated from IUP in 1981 with a BS degree in Health and Physical Education. She is currently employed by the Punxsutawney Area School District as an elementary physical education teacher. She has coached junior high girls’ basketball and the JV girls’ volleyball teams.

He is a 1956 graduate of PAHS. He lettered in volleyball, track and football. He was named to the first team All-District football team and received honorable mention to the All-State Squad in 1955. He was a member of the Little League All-Star State Champion Team in 1950. Ed was the first local Little League player to pitch a no-hit, no-run game in Little League. He was also a member of the 1955 record setting 880 yard relay team and set the District 9 record for 220 yard dash in 1956.

Alan is a posthumous inductee. He is a 1972 graduate of PAHS and participated in football and basketball and was captain, MVP and District 9 All-Star Selection in both sports. He graduated from IUP with a finance degree in 1976. He was president and part owner of Fairman Corporation, which was instrumental in developing several new playing facilities for baseball, softball and soccer in the area. He coached girls’ basketball at Curwensville, where he was named Coach of the year in 2005. He was also the basketball coach at AAU, St. Catherine’s School, and Central Christian Middle School, He was also a Little League Softball coach and manager in DuBois. Alan was also the Central Christian High School varsity golf coach. He spearheaded the building of an auxiliary gym at Curwensville Area High School, which opened in 2005 – “Alan Fairman Center.”

He is a 1990 PAHS graduate and lettered in track and cross country. He was a District 9 champion in 5 events in track over his career. He set District 9 track & field records in the 800 and 1600 meters that still stands. Mike also still holds 4 individual PAHS track records & 2 relay records. He was also a state champion in indoor track in the 3200 meter distance and achieved All-State Honors in Cross Country. Mike has participated and placed in several national-level events and was a member of Florida State University track & field & cross country teams. Mike is currently in San Diego and is a personal chef and teacher of Culinary Art.

Tom is a 1948 graduate of PAHS where he participated and lettered in football, track and basketball. He was All-District in football and received honorable Mention All-State. He received the Andrew Zeedick Cup Award. He attended Slippery Rock Teachers College and received 4 football letters. He is retired from teaching and coaching.

He is a 1953 graduate of PAHS and received letters in track and basketball.   He was a member of the varsity basketball team and made the final winning basket giving Punxsy the District 9 Championship in 1952. He was also chosen to participate in the PA State Semi-Finals in basketball and was on the First Team All-District basketball team. He is a Penn State graduate and is currently retired from teaching at Jeff-Tech.