Congratulations to the inductees: 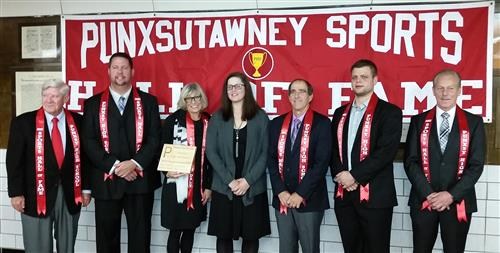 “Gort” was a 1954 graduate of PAHS.  He was an outstanding lineman on the football team and one of the best tacklers in the district.  He was only the third athlete to be selected from Punxsutawney for All-County, All-District, All-State, and All-American football teams.  He also played football for Indiana University and professionally for the Baltimore Colts. He served in the U.S. Army.  Gary was a successful businessman as he had his own company, Conners Construction Inc. Conners Crushed Stone, in Lott, Texas, is the largest employer in Falls County.  The limestone operation grew to five quarries with pieces of equipment including haul trucks, scrapers, rock crushers, wheel loaders and excavators.  Gary passed away at his home in Texas on May 23, 2017, he was 82 years old.

She is a 2005 graduate of PAHS and was a four-year letter winner in both basketball and track. She holds a PAHS record with 1,579 points, and holds the record for the 100 meter race at 12.5 seconds. She was a four year member of the all-district basketball team, and was recognized as the PIAA District 9 Player of the Year for her junior and senior years. She was MVP for the Carl Truance Holiday Tournament.  Following her senior year, Staci earned second team all-state honors. She was named Most Valuable Player of the track team during her junior and senior years, and for three years, she qualified for the state track and field meet.  While at IUP, she made the all time record list for most games played with 125, total points scored 1,141, and had the most rebounds, steals and blocked shots.  She was named MVP of the Pennsylvania State Athletic Conference and was a three time member of the championship team.  She currently works for the United States postal service as a mail carrier.

He is a 1966 graduate of Indiana Area Senior High School.  While in high school, he lettered in football, basketball, and baseball during his junior and senior years.  He taught at Punxsutawney Area High School for thirty-four years. During that time, he served as head coach of the football team for thirteen years, compiling a 75-61-4 record giving him the most wins for a coach in school history. The Chucks won two PIAA District 9 AAAA league championships (1987 and 1991) and one District 9 AAAA Championship (1991).   During the 1991 state playoffs, the Chucks lost 7-0 to Erie.  They were also WTAJ Channel 10 team of the year. He was the varsity assistant coach on the 1977 undefeated football team.  While in Punxsutawney, he was assistant coach under Mickey Barilar, Jack Cassabaum, John Rylke, Gary Garzoni, and Ed Smith.  He was also an assistant under Owen Dougherty at IUP.   Gary also served as PAHS assistant athletic director for seven years and as athletic director for a year and a half.

He is a PAHS graduate of 2007.  He played baseball for PAHS for four years and finished his career as the school’s all-time leader in home runs, walks, and runs scored. He was honored in 2007 as being named Pennsylvania’s Gatorade High School Player of the year. He was selected in 2007 Major League baseball draft by the Cincinnati Reds and was the 15th overall selection. He plays the position as catcher and in 2014 he was named to the National League all-star roster having had a .273 batting average, hit twenty-five home runs, and drove in eighty runs, which were all career highs. This was his seventh season with the Reds.

He is a PAHS graduate of 1992 and lettered in baseball (4), basketball (3) and football (1). He was the leading scorer and rebounder for the 1992 PA State runner up.  He was named a PIAA District 9 All-Star. In baseball, he held numerous records including innings pitched and strike outs and had a 15-5 record. He received a two-year baseball scholarship at Gulf Coast Community College, in Florida and was named to All-Section and All-American teams and held numerous pitching records including 48 straight innings without giving up a run.  He received a full scholarship to the University of Miami Hurricanes and was signed by the American League’s California Angels.  During his first year of professional ball, he pitched a record forty-three innings without allowing a run to score. He was named the Angels’ top-ten prospects.  He’s employed at Indiana University of Pennsylvania in International Education, and he teaches basketball and baseball in the Indiana School District.

He is a graduate of PAHS class of 1967 and was a member of the track and field team and he set the school’s pole vault record during his senior year.  He was a member of Jack LaMarca’s undefeated dual meets team and was a member of the District IX Track & Field Championship team in 1964. He was a member of Coach Mickey Barilar’s undefeated junior high football team in 1963.  He was named the PAHS Gym Club outstanding gymnast during his senior year.  He earned a Bachelor of Science degree in Health, Physical Education and Recreation from Slippery Rock University and was hired by the Punxsutawney Area School District, where he taught physical education for 44 ½ years.  He began coaching in 1971 as a varsity assistant coach under Coach Jack LaMarca and later as head coach until his retirement in 2015 after 45 years as coach.  He also served as the head Indoor Track and Field coach.  In addition he coached 43 seasons as the head boys cross country coach and at the same time, served as the girl’s coach during the 70’s, 80’s and 90’s.  He was the coach of Punxsy’s first every PIAA Scholastic State Championship boys cross country team in 1977 and also had two teams finish 3rd against some of the largest schools in PA.  During his career he had 23 District IX boys championship cross country teams and coached some girls cross country teams to District IX championships as well.  Under his reign as coach he had runners selected for the All East Championship meet in the state of Indiana and had several individual state champions.  The Indoor 4 x 800 relay team set the state record in the mid 90’s and was 2nd in the National Championship meet at the Reggie Lewis Center in Boston.  He was the coach of Mike Hampton who was a two time state champion in the 1600 run, 2nd place finisher in the Penn Relays and competed at the Millrose Games at Madison Square Garden in NYC as well as the Jr. National championships in Columbus OH and Fresno CA.  Throughout his lifetime he has kept busy as a lifeguard and gave private swimming lessons, was a member of both the TSTCA (Tri State Track Coaches Association) and PTFCA (Pennsylvania Track & Field Coaches Association), and was certified as a Level I United States Track & Field Coach.    He was the architect/organizer of the Thousand Mile Marathon held on the old cinder track at Harmon Field to raise money toward the first all weather track. John received the Life Time Achievement Award from the Pennsylvania Tri-State Track Coaches Association, an association of more than eighty schools from western and central Pennsylvania.