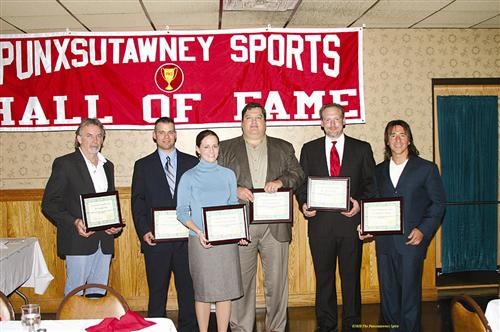 He is a 1978 graduate of PAHS and was a member of the Punxsutawney last undefeated football team in 1977 and played basketball. Bizousky collected nine letters in football, basketball and track. He was valedictorian of his high school class and attended the University of Virginia on a full scholarship for football. Playing against the likes of Lawrence Taylor, Boomer Esiason and William “The Refrigerator” Perry.   Bizousky was named to the ACC All-Academic Team in 1981 and in 1992 he earned his Doctor of Osteopathic Degree from Nova Southeastern University.

He is a 1991 graduate of PAHS and was a three-year letterman in football. In 1990, Grusky set the single-season rushing record (1,417 yards) and scoring record (22 touchdowns and 4 two-point conversions for 140 points) over a 10-game schedule. His career numbers included 2,113 yards rushing and 36 touchdowns. On September 25, 1990, he rushed for 233 yards and scored all 34 points (5 touchdowns and two 2-pt. conversions) in a 34-12 victory at Clearfield. Grusky was also a three-year letterman in track and field. He was the first Punxsy male athlete to win the James Manners Award for finishing first in the shot-put, discus, and 400-meter relay at the 1991 District IX track meet, and his career-best shot-put throw of 55 feet 6 inches ranks as one of the longest throws in school history. A 1995 graduate of Carnegie Mellon University, Grusky was a four-year letterman in football and track and field with CMU. He finished his college career as CMU’s second all-time leading rusher and held the school’s indoor and outdoor shot-put records.

He is a 1993 graduate of PAHS and was a three-year letterman in football and basketball and was a four-year letterman in baseball. Harrold was a member of the first team of the District IX All Star Basketball Team and was chosen to participate in the third-annual Northwestern PA All-Star High School Basketball Tournament.   Harrold received an athletic scholarship for baseball to attend Mansfield University, where he was a four-year letterman and received his bachelor’s degree. He is currently a Special Education teacher in the Spring Cove School District in Martinsburg. He also coaches baseball for the Penn Cambria School District. Harrold is the Mayor of Ashville, a small town near Altoona.

He is a 1946 graduate and is being inducted posthumously. He played and lettered in basketball. He also played for Penney’s, the Beaver Bombers and Army Navy Punxsutawney Packers in the City League and the JC League. Pifer was also a boxer in the late 1940s.

He is a 1978 graduate of PAHS and was the class president, a three-year letterman in football and two-year letterman in wrestling. Outside of PAHS, Taladay was a member of Slippery Rock’s power lifting team, where he won and placed in numerous competitions. Taladay has also participated and placed in several mountain biking events and is an accomplished rock climber, climbing ridges and mountains throughout the US, Canada, Italy and France. He graduated from Clarion University in 1982 and earned his Juris Doctorate from the University of Pittsburgh School of Law in 1987.