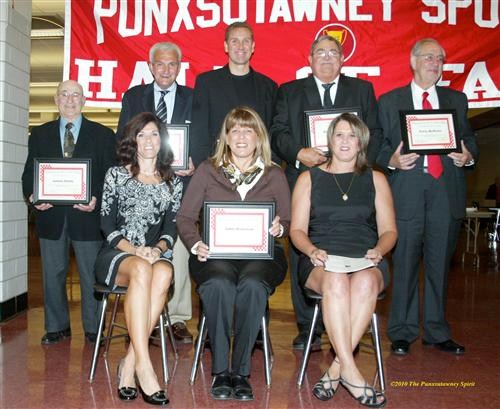 He is a 1964 graduate of PAHS. He lettered in football 3 years and during his senior year, was named to the All-District Team and the Skyline Conference Team. He was also a member of the undefeated team of 1964. Dick also lettered in golf for 3 years, qualifying him for the state golf tournament as a junior & senior.   At Dodge City Junior College and Fort Hays Kansas State Teachers’ College, Dick played guard and also lettered in golf at Dodge City. He also participated in the National Junior College Golf Tournament in Amarillo, Texas. After college, he was a physical education teacher for 10 years in Kansas and PA, as well as an employability counselor for North Central PA Regional Planning & Development. In addition, Dick coached Little League baseball and softball for 10 years, and was a Little League board member for 5 years.

Mike is a 1979 graduate of PAHS and lettered in basketball 3 years before receiving a full athletic scholarship to attend Gannon University-a perennial top 20 NCAA Division II basketball program in Erie. Mike helped PAHS win District IX Championships during his junior and senior years. During those 2 seasons, Punxsy advanced to the PIAA Western Quarterfinals and he was Team MVP and leading scorer. Also during those 2 years, he was District IX All-League, District IX MVP and All-State Honorable Mention. Upon graduation, he was PAHS all-time leading scorer with 1,211 points. His PAHS career included earning a letter for the track & field team. He was a member of the 2-mile relay team, which currently holds the school record. Mike earned a B.S. degree in business administration at Gannon in 1984, and is a 25 year veteran with the PA State Police as a trooper.

Perry is a 1962 graduate of PAHS and was a 2 time letter winner in both football and volleyball, but was best known for his coaching career, which included 7 years as a football assistant, 13 years as a head track and field coach, 4 years as a head volleyball coach and more than 10 years as both a junior-high football and track and field coach. His coaching career included 1 undefeated track and field season, 3 league titles, 3 district titles, 7 top-10 finishes at the state meet. He coached his volleyball team to 2 state-ranked years of the 4 he coached. He was also part of the school’s district boys’ volleyball championships in 1960 and 1961 and received Honorable Mention All-District status as a football player. Other accomplishments include being named Junior High Student Council Teacher of the Year and Who’s Who Among American School Teachers (3 times). He was an honorable member of the Kiwanis Club and received an honorable discharge from the US Air Force (1962-1966).

He is a 1948 graduate of PAHS and lettered in football, baseball, and track and field. Jim had his name engraved on the Andrew Zeedick Cup in 1947. After high school, he played for several teams, including Punxsy’s semi-pro football team, the Punxsutawney Beaver Bombers and semi-pro baseball for a team in Ontario, Canada and the Armed Services Baseball League. During his time with the Armed Forces he was invited to try out for the Pittsburgh Pirates by attending training camp in Florida, but did not try out. Jim is also a member of Punxsutawney Borough Council and is part-owner of Stello Foods, Inc.

He is a 1954 graduate of PAHS and now resides in Milwaukee, Wisconsin. Bill started as a sophomore on the undefeated 1951-52 team and was the leading scorer in the following 2 years. He was also named All-District in 1953 and 1954. Bill was the leading district scorer and set Punxsy’s single-game scoring record (at that time) with 36 points and was named to the All-State squad. He also lettered in football and volleyball. After high school, he was awarded an athletic scholarship to the University of Pittsburgh, and was a 1956 member of the Pitt Sugar Bowl football team and a 1957 member of the Pitt NCAA basketball team. In 1998, at the age of 60, he ran in the New York Marathon. Bill was a leading authority on induction sealing and had conducted seminars on the topic throughout the US, Canada Europe and Japan. He has also had articles about induction sealing published in North America and Europe.

John is a posthumous inductee. He was a 1953 graduate of PAHS. He lettered in football, in which he was named to the All-District team, and 3 times in track, in which he competed in the state tournament. He held the PAHS shot put record for several years. John attended college on a football scholarship. He also played professional baseball for Detroit and Baltimore as well as service football and baseball and football for the University of Georgia.