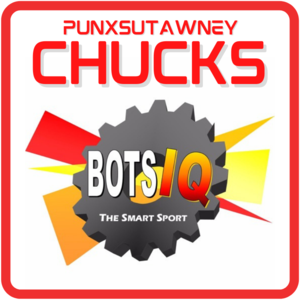 The PAHS Bots IQ Teams had another incredible competition season! Both teams finished in the Top 5 of this year's Grand Champion Rankings. For more information from this year's competition, click on this announcement's headline or visit the LATEST NEWS section of our website. Go, Chucks!

Congratulations to both of our PAHS Bots IQ Teams on another incredible season!  Here is a recap from their advisor, Mr. Kevin Hughes:

Due to Covid safety protocols Bots IQ held several mini competitions.  Each participating school “signed up” for a date and each competition declared a winner based on the teams' performance in the arena.

Both PAHS robotics teams competed in a mini competition at Robert Morris University on May 27th.  Each of our teams made it to the final bout and had to compete against each other.  The team managing the robot called Shredded Metal defeated Team Escanor.

After all of the mini competitions had finished, documentation scores were tallied and final places were determined.  Both Punxsutawney teams place in the top 5 on the Grand Champion Rankings!  Team Shredded Metal placed second overall and Team Escanor placed fifth!

Another highlight was Dawson Neufeld helping another team to get into compliance by loaning one of our master switches and soldering it in place for them.